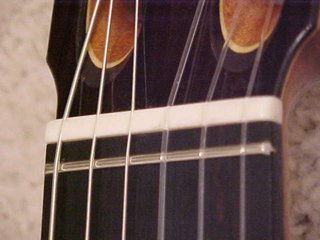 When using a zero fret, the function of the nut changes, in that it becomes responsible only for the string spacings. The vertical adjustment of the strings is achieved by using an additional fret at the position where you used to have the nut. This detail was fairly common some decades ago, but for some reason became unpopular.

What is it good for?

Everyone who plays the guitar for a while will have noticed that the open strings sound brighter than fretted ones. The high E-string in particular is known to sound very sharp. Advanced players try for this reason to avoid these notes in their fingering, especially in melodic passages. Searching for a reason for this phenomenon, we came to the conclusion that this happens when the string is fixed in this position and has no sidewards movement. Plucking a fretted note, the string will slide on the fretwire whilst it vibrates, muffling the tone to a certain degree. Simulating a fretted note by an additional fret on the zero position should make the open string sound “fretted”. The result of the first experiment was very convincing, it worked perfectly and all notes sounded very similar. Regarding intonation, it also turned out nicely. The former open string behaved as if it was fretted.