The emphasis of my work is in the construction of master grade classical guitars. Furthermore, I am engaged in building steel string guitars. Occasionally I also take the opportunitiy to build other kinds of instruments such as historical instruments, but also electric guitars and basses. Detailed information concerning the instruments can be found here. As well as being involved in the repair and restoration of almost every kind of stringed instrument, I also offer a wide variety of student instruments and accessories. 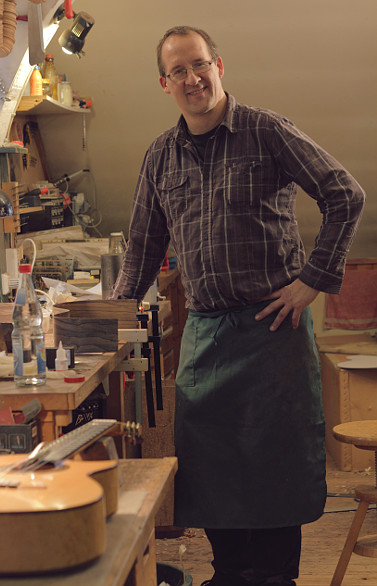 For me, a point of major importance is the high amount of manual labour invested in my instruments. A genuine handmade instrument usually has a completely different appearance than one tooled by a machine. I’m sure that this explains much of the fascination of old instruments. It is often those little irregularities (not lack of neatness !), which, although almost invisible to the naked eye, widely enhance the appearance of those instruments. Handmade instruments age in a beautiful way and won’t ever appear shabby.
Maybe even more important is the fact, that handcraft can’t be replaced even by the most perfect machine, especially regarding tonal balance and good playability.
Another point of big importance is the choice of tonewoods. Great care is taken in the selection and ageing of the woods. Furthermore, I always try to obtain the wood as raw as possible, sometimes even as whole trunks, in order to get the most control over the process of cutting.
Despite this quite conservative approach I don’t deny the use of modern materials and construction methods when I see a real improvement. The necks of my classical guitars are reinforced with Carbon-rods e.g. and I also build guitars with sandwich-tops.

Achim-Peter Gropius was born on February 25th 1967 in Berlin were he received his first guitar lessons at the age of nine. After finishing secondary school, he decided on an apprenticeship as a guitar maker rather than studying guitar. He began training as a guitar maker in 1991 and 1994 at the violin making school in Mittenwald, receiving his diploma in 1994. He then went on to work at the workshop of Luthier Max Strohmer in Nuremberg. In December 1994 he moved to Reutlingen where he worked for a master violin-maker, restoring instruments of the violin family. During this time he continued developing his own instruments. In August 1996 he opened his own workshop in Reutlingen. Two years later, in February 1998 he passed the examination as a master luthier. Since then, his instruments are finding a growing reputation amongst players in Europe, Asia and the USA. His guitars can be heard on numerous recordings.