Mahogany (Swietenia-, Entandophragma, und Khaya species) is a general name covering a huge number of botanically different timbers, which are, however, similar in appearance. Mahogany is mostly a medium weighted timber with a brown-red colour. Many species show a structure changing between light and dark, caused by the alternating direction of the woods fibres. Weight and firmness can vary remarkably between different species, strongly influencing the use of the particular piece of wood.

used for:
neck, back-braces, linings, blocks, back and sides 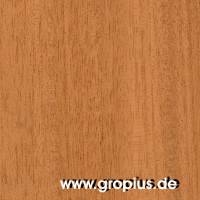