Maple (Acer Pseudoplatanus) is certainly one of the tonewoods with the longest tradition of all. Up until now, it has been used for the back and sides of practically every bowed instrument made up until this very day.
Maple is a medium-hard wood with an almost white colour. For instrument making, pieces with special growth-irregularities are preferred. The first is the so-called “flamed”-maple, whose fibres run like waves (top picture). More rare is “birds-eye”-maple (bottom picture) with its knot like structure.
Besides the described rock maple, there are a number of further maple-species, which do not play a major role in instrument making.

used for:
back, sides, neck, lute-backs

tonal properties:
maple produces a very transparent, silvery coloured tone. Although the projection capabilities of maple are perhaps not quite as strong as those of rosewood, it is still an interesting alternative to the more mellow rosewood instruments. 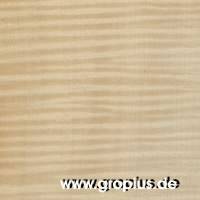 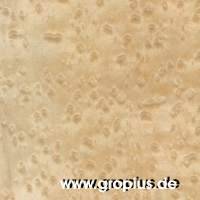